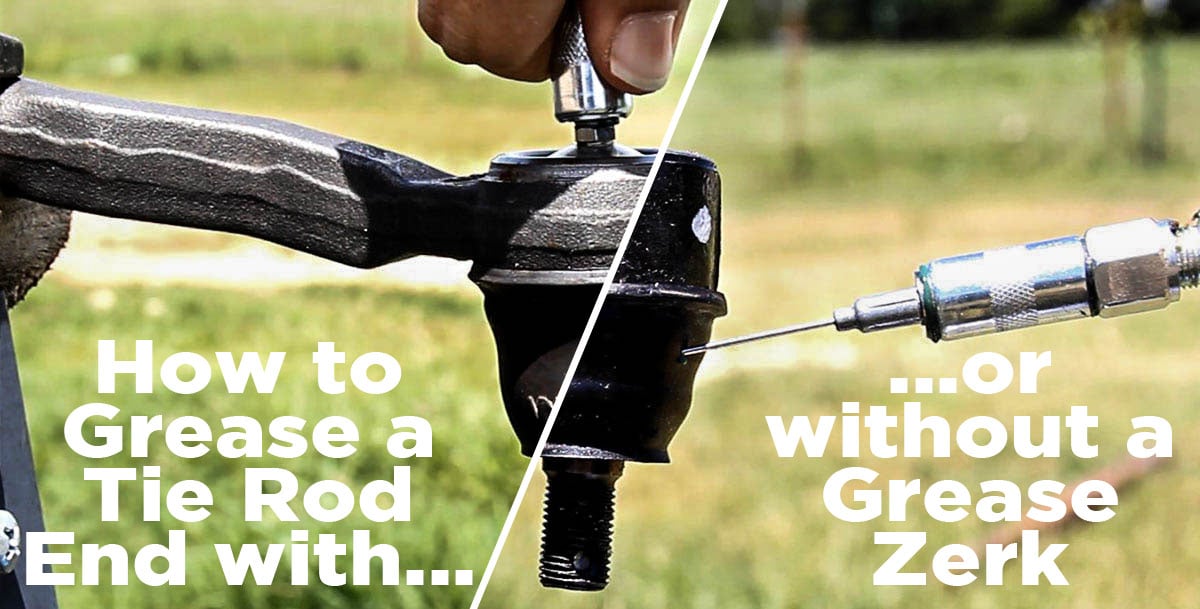 How To Grease Tie Rod Ends

A question we constantly get at DST is “How do I grease my Tie Rod Ends?” Some tie rod ends come with a grease zerk fitting installed and some are sealed from the factory with no easy avenue for lubrication. Here we will share some detailed instructions about how to grease your tie rod ends with or without a zerk fitting, what grease you should use, and how to troubleshoot potential problems.

Grease is cheap compared to your vehicle so extending the life of the parts that make up your car with some routine lubrication is a no brainer, but lubricating a sealed tie rod end is more of a temporary measure to breathe some life into a dry, groaning part.

If your tie rod ends are clunking and upon inspection you find that they are loose then they are probably too far gone. Grease is good for noise and maintenance but it will not make a failed part function properly. If you do need to replace your tie rod end we offer Moog outer and inner tie rod ends for most makes and models.

What is the Best Grease for Tie Rod Ends?

Basically any grease rated “GC-LB” by the NLGI (National Lubricating Grease Institute) is graded to work for all your chassis lubrication needs, including tie rod ends. Lucas X-tra Heavy Duty Grease or Marine Grease are designed to last in extreme environments and keep your tie rod ends lubricated and operating smoothly. While that may seem like overkill, using quality tie rod end grease is much cheaper than a replacing a tie rod end. Also we sell these lubricants 🙂

Lucas X-tra Heavy Duty Grease is designed for, you guessed it, heavy duty vehicles like those used in farm and construction settings. This is quality lithium based lubricant with additives that make it more resistant to the elements and give it more sticking power, boasts an effective lifespan 4 times longer than regular grease. Great option for the tie rod ends on any vehicle but really shines in off-road or fleet vehicles, a tough commute, and adverse seasonal weather.

Lucas Marine Grease uses calcium sulfonate thickeners and is designed specifically with water-craft in mind but it works wonders in vehicles that are consistently exposed to water, slush, snow, and road salt. This grease also provides above average protection against corrosion and rust making it a perfect fit for a vehicle that spends a lot of time in a coastal climate where salt in the environment can drastically shorten the life of chassis components. If your climate is tropical, coastal, or snowy then this grease will serve you well and very likely extend the life of your tie rod end compared to regular grease.

How to Grease Tie Rod Ends with Zerk Fittings

Tie rod ends have an articulating metal stud that needs grease to keep your steering smooth. A zerk fitting makes this process very simple and gives you an easy way to keep those tie rod ends in good shape.

The general consensus is to grease these parts when its time for your oil change, but garages do not always do this. Also if a lot of water and grime are thrown around under your car you might want to lubricate your tie rod ends more often. Now lets take a look at how to grease those tie rod ends.

DST offers these tools (minus the rag) in a Grease Gun Combo for your convenience.

First, inspect the dust boot for tears or leaks. If you find any then you should replace the dust boot to prevent contaminates from enetering the joint and you might consider replacing the tie rod end if there is any looseness or vertical movement.

Now, use the rag to clean the zerk to avoid any contaminates following the grease inside. You should see bright shiny metal before you attach the grease gun. If the zerk is rusted or corroded beyond simple rag cleaning you can use something stronger or replace the grease zerk.

Next, attach the grease gun to the zerk. Position the nozzle squarely over the zerk and press down until you feel the “snap” of the nozzle grabbing the zerk. If the coupler on your grease gun is adjustable you can unscrew it a small amount to loosen the jaws to make the connection easier, just remember to tighten it back down before pumping.

* If the nozzle hasn’t connected to the zerk then grease will ooze from between the zerk and the grease gun.

Then, watch the dust boot and give the grease gun a few good pumps and STOP if you see the boot begin to swell. It is best not to keep greasing once you see the boot swell since the seal that holds that grease in the tie rod end can be compromised if too much pressure is applied. If the seal breaks you will be replacing that part sooner than later.

* Some tie rod ends have a grease relief valve that will allow old grease to safely exit the tie rod end without compromising the seal.

Detach the coupler from the fitting. This can be difficult but you can loosen the jaws again if you have an adjustable coupler.

Lastly, clean off any excess grease from the zerk and dust boot. Drive the car around the block and check for leakage.

* If you have a rough commute or hit the trails on the weekend then take your vehicle out on some similar terrain and check the joints afterward.

How to clear a plugged grease zerk fitting

Few things are more frustrating than knowing a job is going to be a piece of cake and then have something go wrong. You expect the lubrication process to be short and sweet but if grease is oozing out of every connection on your gun when you start pumping then something is definitely off.

You can remove the zerk and try to pump grease through it as a first step but if nothing comes out then your zerk is probably plugged with old hardened grease. Here we will show you a simple way to clear that zerk fitting.

First, remove the zerk fitting and attach it to your grease gun.

Try pumping some grease through the zerk and this will sometimes push hardened grease out of the fitting.

If there is still no grease moving you can use a propane torch to heat up the zerk. This will boil out any hardened grease that is plugging the grease fitting.

Now just reinstall the zerk and you should be able to get some grease into your part.

Now we will look at some other problems that can come up when greasing a zerk fitting.

Does anyone have any advice that we didn’t mention? Have you had any experiences with greasing a tie-rod end that could be helpful to a beginner? Please leave us some comments or questions in the comments section at the bottom of the page or if you have questions you can contact the customer service folks at suspension.com. Good luck!

How to Grease Tie Rod Ends without Zerk Fittings

Theoretically, sealed tie-rod ends come from the factory with sufficient grease and are buttoned up tight to keep contaminates out, but if you want to refresh the lubricant in your tie-rod ends you can use a grease gun needle attachment to get past the dust boot and pump some grease into that part. A lot of people have different opinions about whether or not this method actually gets any grease where it’s supposed to go, but if your tie-rod ends are making noises like they need some grease you can quiet them down using a grease zerk needle.

You can get all of these tools (find your own rag) in a Grease Gun Combo from DST.

With any part protected by a dust boot, you should always inspect the boot. If it is torn or possibly even gone then you need to replace the dust boot and you should consider replacing the entire tie-rod end. Contaminates may have already worked their way into the bearing, wearing the smooth surfaces down and setting it up for failure.

Clean the tie rod end and boot so you can see what is going on with the seal when you begin pumping grease into it.

Attach the grease zerk needle adapter to the grease gun and this can be tricky so we advise caution. If your coupler is adjustable remember to tighten the nozzle once the needle is on or grease will ooze out from between the needle and grease gun.

* If you are not careful you could easily be using the rag to wipe up blood instead of grease. If you have an adjustable coupler try loosening the clasping mechanism to make the process easier.

Insert the needle into the boot close to where the boot meets the housing to make sure more new grease is getting to the bearing and old grease is being pushed away.

Watch the dust boot and pump slowly, stopping once the boot swells. There are some different schools of thoughts here; some say to keep pumping until grease oozes out from under the edges of the boot while others believe once the boot starts to swell you should stop pumping. We suggest stopping early since maintaining the integrity of the boot is important.

Remove the needle and clean off any excess grease. There probably won’t be much excess grease but if there is wiping it away will keep dust and debris from collecting on that extra grease and allow a quicker diagnosis of future problems, like a leaky dust boot or failing seal.

Lastly, drive the vehicle around the block or down a dirt road if that’s your daily commute. Once you’re back in the driveway take a look at those wiped down joints and see if any grease is leaking. This could mean a busted seal, but if everything looks and sounds in order then congratulations, you’ve just “greased” the un-greasable.

Weather stripping adhesive can be used to cover the needle hole in the dust boot if you’re worried that water or contaminates might make their way through to the smooth working surface of the tie rod end. This adhesive forms a flexible, water-proof seal that is resistant to the elements. Simply cover the area with the adhesive and be sure to follow the instructions and safety precautions. 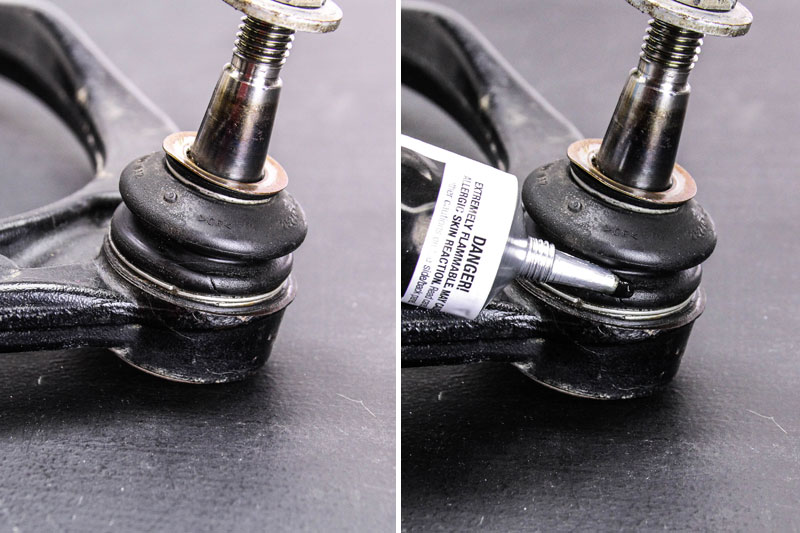 So, if you want to try and breath a little bit of life into those sealed tie rod ends we offer a Grease Gun Combo which contains all the tools used in this how-to. To see another suspension maintenance project take a look at our how-to about greasing ball joints without a zerk fitting.

Has anyone used this method to grease a sealed tie rod end? Are there any helpful tips and tricks that you’ve discovered? If you have any questions leave them in the comments section below or contact the customer service experts at suspension.com. Good luck!

If you’re experiencing play in your steering or a shaking steering wheel then you may have a tie rod end that is already worn down and while lubrication may buy it some time, eventually that part will fail completely. A tie rod end that is loose or has vertical movement needs to be replaced. Moog offers premium inner and outer tie rod ends for most makes and models, and they usually come with a grease zerk fittings for easy maintenance among other advantages over OEM replacements.